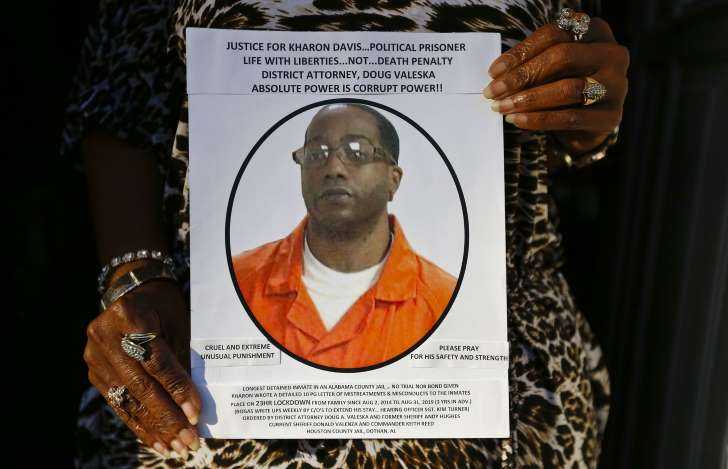 Saved
Login to Rate Seller
Seller's Other Listings
visit seller's storefront
Alabama Man Spends Decade Behind Bars Before Even Going to Trial................................ by Jon Schuppe ............................... An Alabama man who has spent a decade in jail on a murder charge will have to wait at least a few more months before a jury can decide whether he's guilty. Kharon Davis tried to get his case dismissed, arguing that he's been sitting behind bars for far too long. But a judge last week ruled against him, saying the extraordinary delay ─ including seven trial dates that have come and gone ─ was Davis' fault, and not a violation of his Sixth Amendment right to a speedy trial. "A ten-year delay from the time of arrest until the time of trial may constitute a denial of speedy trial under other circumstances, but not in the instant case as all delays in this case are attributable to the defendant," Houston County Circuit Court Judge Kevin Moulton wrote in a decision released Friday. Davis' lawyer, Thomas Goggans, did not immediately return messages seeking comment on Tuesday. Chrycynthia Davis, mother of Kharon Davis, holds a poster she made for her son. Brynn Anderson / AP Davis, accused of participating in a fatal 2007 robbery in the city of Dothan, is among a relatively small number of contemporary cases in which people have been held for a decade or more before trial. They include a purported gang member who was held 10 years in a Miami jail before admitting in 2010 to killing his girlfriend and a schizophrenic Mississippi man held 11 years on a murder charge before prosecutors promised last year to move him to a mental institution. Related: Rural and Small-Town Jails Are Driving America’s High Incarceration Rate, Researchers Find Davis had two co-defendants in the killing of Pete Reaves, which authorities have described as a drug-related robbery gone bad. One of the accused was acquitted in 2009. ...........................source nbc news......to continue reading.
Listing ID: 1382

Be the first to ask a question about this listing!